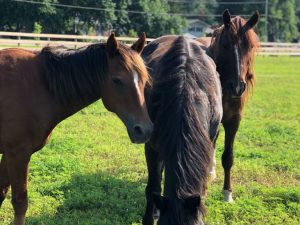 Are American Mustangs. These older gentlemen are in their early 30’s. Fire and Smoke came to the rescue in December of 2017 and are an extremely bonded pair. They’re both grouchy old men, and like to bicker with one another all the time. They demand their daily snacks, and will throw fits if they are not given them. On nice days, they can be seen playing with one another and romping around, followed quickly by shared coughing fits, as they seem to think they’re much younger than they really are. (Photo bombed by Justice, on the lef